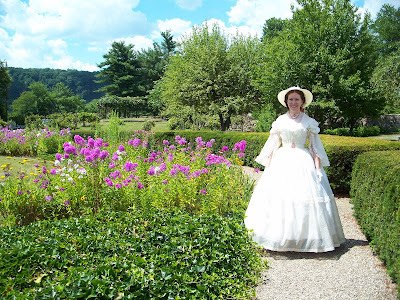 Several weekends ago I had the delight of welcoming my mother, Nancy, and her good friend, Audrey to Pittsburgh, PA for a weekend of sight-seeing and to attend a living history event at Old Economy Village in Ambridge, PA.
We had a wonderful few days of touring Pittsburgh. We went to the Zoo, Aviary, Phipps Conservatory, Duquesne Incline, my favorite thrift store - Common Thread, and a new found favorite restaurant - Legends of the North Shore.
But the main event of the weekend was the Old Economy Village event. Vince and I hadn't been out to a reenactment in quite a while, so it took us a long time to get ready! We waited until the morning of the event to find and iron all of our clothing because we're so organized like that. But we arrived just in time to participate in the fashion show - my favorite part of the event. 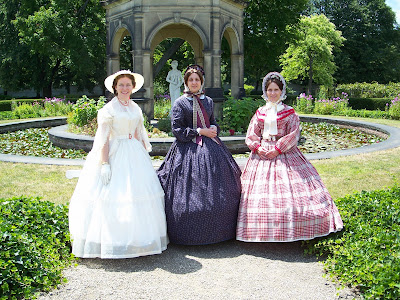 We also enjoyed strolling in the gardens of Old Economy. They are stunning. My favorite part is the classical statue and pond above. It's exquisite in any season of the year.
I'm wearing the ivory sheer silk dress that I made last summer. I'm in the process of finishing a longer petticoat for under it. I am wearing a straw hat that I made that is trimmed in white flowers with coral centers and coral ribbon. An original coral necklace, brooch, and belt buckle add color to the ensemble.
Audrey is wearing a beautiful blue cotton dress made by Somewear in Time of Gettysburg. Her bonnet is made by Beverly Lister. Nancy's dress is a sheer cotton dress from Family Heirloom Weavers reproduction fabric trimmed in ruched red silk. 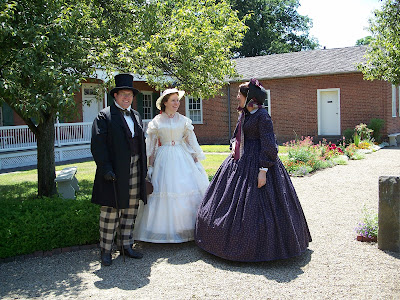 Vince's frock coat was made by Kara Bartels of Corner Clothiers - she did a fantastic job! His other clothing items were made by my mom and I as Birthday and Christmas presents. 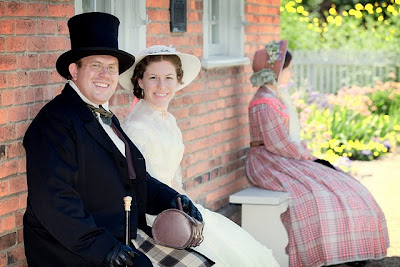 This photograph was taken by a very talented photographer at the event. We had the pleasure of posing for many such pictures throughout the day. You can see my mother's bonnet in the distance. This is a straw bonnet form from Beverly Lister that my mother trimmed herself.
Vince was asked repeatedly throughout the event if he was portraying a doctor. No, he wasn't. His leather portmanteau was purchased from Landis Valley Museum and is a gentleman's travelling case to carry important documents.
We had such a wonderful time at the event. I do hope that they decide to organize a similar event in future years.