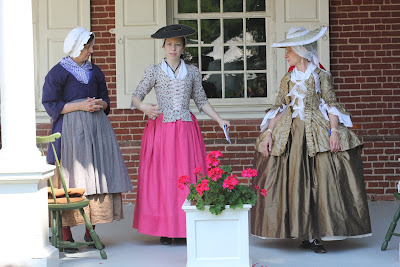 This past weekend I attended the Revolutionary War Reenactment at Rock Ford Plantation in Lancaster, PA where I gave a presentation on women's fashions of the day. It's been awhile since I had the opportunity to talk on women's fashions, and I thoroughly enjoyed having the chance to share my love of historical clothing with others. Above is a picture from the presentation. I talked about working women's clothing to wealthier women's clothing of the Revolutionary War years and Audrey (on the left in the photo above) and Nancy (my mother, on the right) modeled the clothing starting with their undergarments and dressing onstage (with some assistance) into their outer garments. 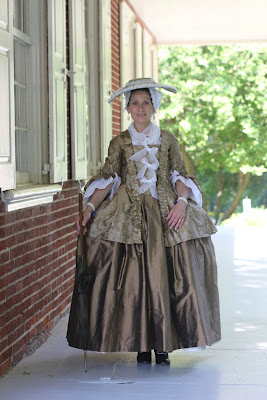 My mother, Nancy, attired in her silk Pet en l'air Jacket and Skirt. 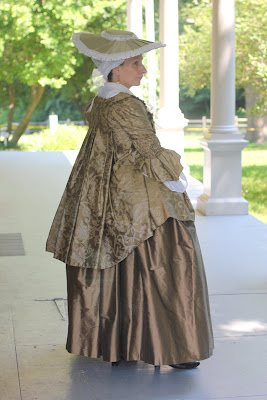 The silk covered straw hat I made for her several years ago to coordinate with the outfit. 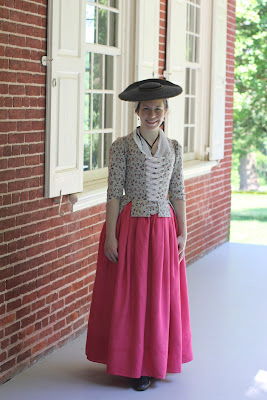 I wore my printed cotton jacket based off of an original in the collection at Colonial Williamsburg and featured in Costume Close-Up by Linda Baumgarten. 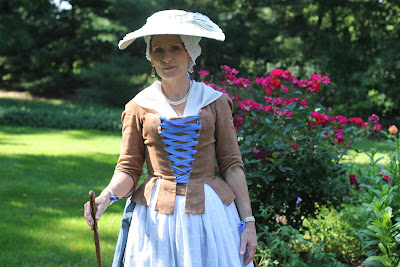 My mother wore a similar jacket during the event. This jacket is one of the first historical garments that I ever constructed, made when I was probably about sixteen as a gift for my mother and based off of the original jacket mentioned above. Copper linen with matching stomacher. 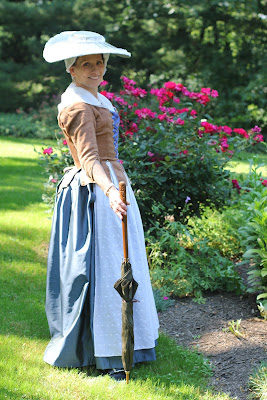 Mom completed the silk petticoat for the event and found this beautiful sheer embroidered cotton for an apron at Needles & Thread in Gettysburg. 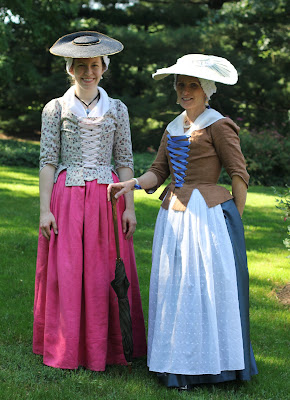 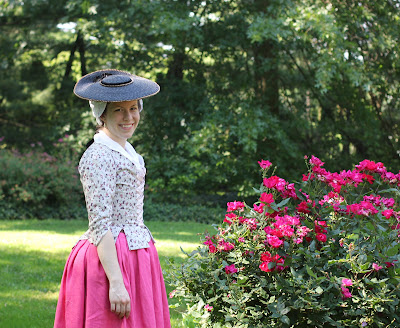 The reenactment, as usual, was a fantastic event. This was the third year that Rock Ford has hosted a Revolutionary War Reenactment, and they did a fantastic job, as usual. This year it was a National event, so there were far more reenactors, sutlers, and spectators there than usual, and I hope that the event will continue to be a National event in the future. The event happens every three years, so keep your eye out for another great event in 2015. 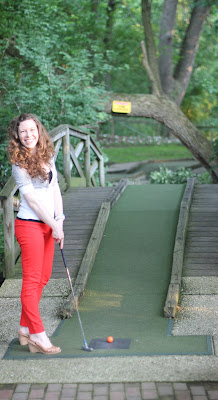 After the two day event, I threw on some modern clothing and went miniature golfing with Vince's family. I was a terror on the miniature golf course, attempting some 'freestyle' techniques, which led Vince to think that I would be more successful at the driving range. All in all, a fantastic weekend!