18th Century Undergarments for 'The Rivals' 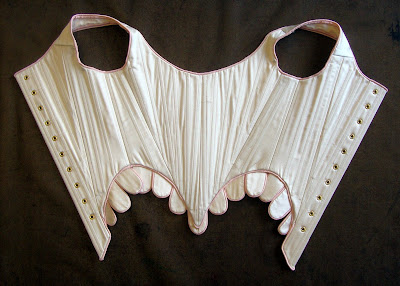 My most recent and all consuming project is an 18th century dress for CMU's production of The Rivals, which opens at the beginning of October. The dress is already well on its way to being completed. Here are a few glimpses of the undergarments that I created for the costume.

The undergarments will not be seen by the audience, but much care was put into their creation. Each component of the costume should be beautiful inside and out so that the actress feels that she is stepping back in history and becoming her character as she dresses for each show. I am creating the costume for 'Lydia', designed by third year Costume Designer, Albulena Borovci. Lydia's dress is made of pink silk taffeta and trimmed with pink silk. I selected the fabrics for the undergarments to compliment her dress and personal style.

The stays are made of luscious off-white silk satin and corded and lined with pale pink silk taffeta. The style is based off of the popular 'Diderot' stays, but some alterations have been made for ease of alterations in the future. For example, extra seam lines have been added so that the stays can be taken in our let out at more points. 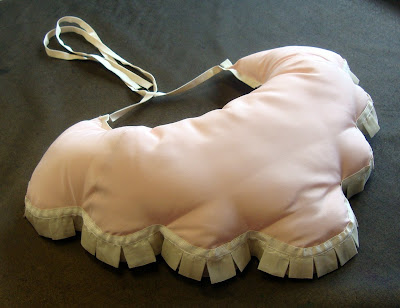 The rump pad was made of the same pink silk taffeta and trimmed with box pleated sheer fabric. 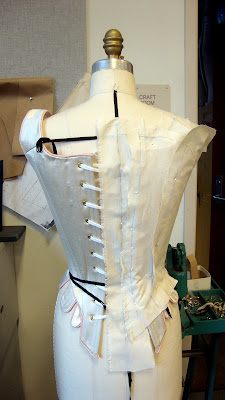 Here the back of the dress bodice is being draped. 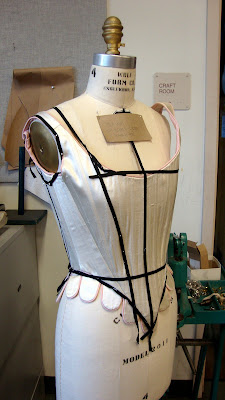 Before the bodice was draped, the dress form was padded to the appropriate size and the stays added to provide the appropriate shape. The design lines were then marked out with black twill tape pinned to the form. After this step the bodice is easily draped and the design lines marked on the muslin. The drape is then removed from the form and the lines transferred to brown paper and corrected. Since the bodice was draped over the form which had been padded to the correct size and shape, the fitting went smoothly with no alterations to the bodice.