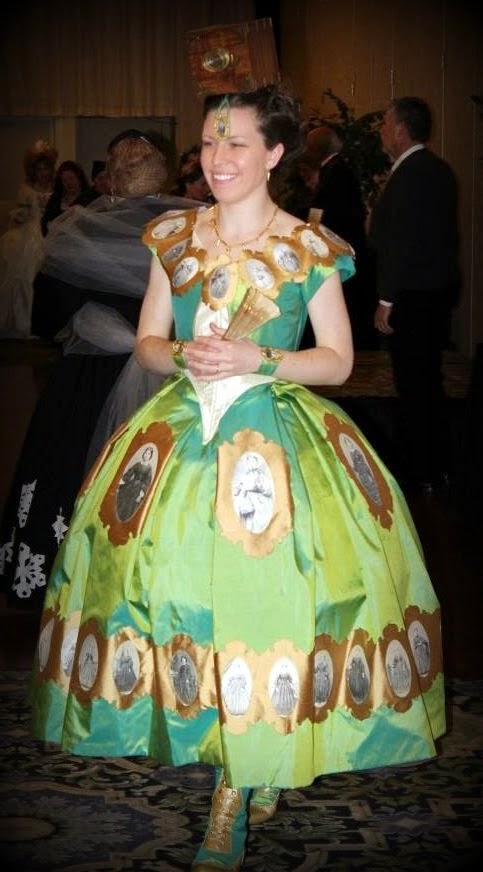 I recently completed what has probably been my favorite sewing project to date - a costume to wear to an 1860s Fancy Dress dinner. In the 1860s, a Fancy Dress party was a costume party. Thus, my costume had to be something that would have been appropriate for a costume party in the 1860s - not just a costume. I LOVE researching Fancy Dress costumes. When I was invited to this event I knew going in what my top costume choice would be, but I did tons of research anyway just for fun and came up hundreds of images of Victorian Fancy Dress costumes in fashion magazines, paintings, and period images. But, I knew that this costume was begging to be made, so I began researching in order to create an authentic reproduction of it. 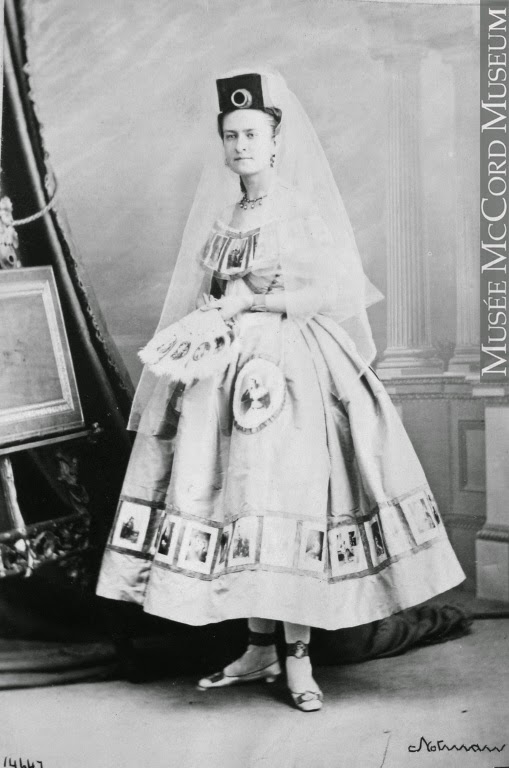 This is the original image in the collection of the McCord Museum that inspired my creation. This image was taken in Montreal in 1865. 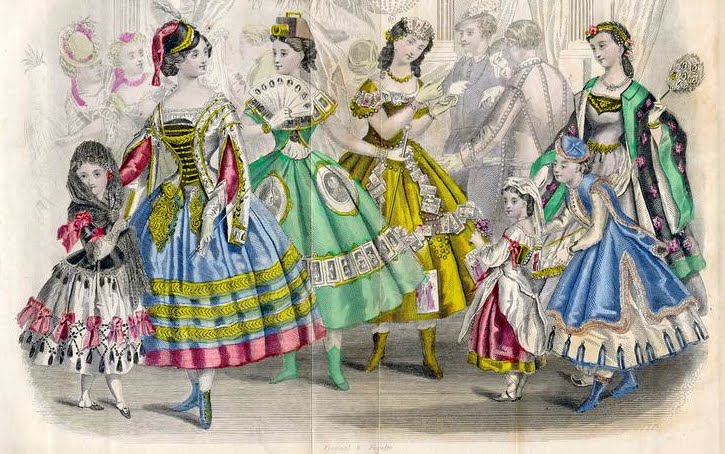 A year later, Godey's, an American fashion magazine, published a similar dress in their October 1866 issue.

These two images are easy to find on the Internet.

An image that is not easily found is this image: 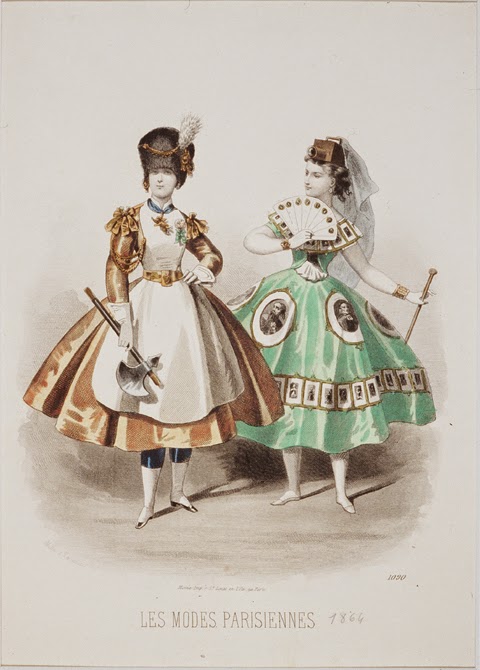 This engraving was published in the January 1864 issue of Les Modes Parisiennes. Somewhere in my research I was fortunate enough to stumble upon a mention of this engraving, undoubtedly the image that Godey's copied their design from. Once I knew that this engraving existed it took several hours of searching to track down the image online, and in the process I learned of a book that had all three images and a description of a version of the dress that had been worn prior to the French engraving. In the book, The Photographic Experience, 1839-1914 by Heinz K. Henisch and Bridget A. Henisch, the author says, "On February 13, 1864, The Illustrated London News carried a description of the "grand Fancy Ball" given recently in Paris by the Minister for Foreign Affairs. Of all the costumes worn on that gala occasion, one in particular had caught the reporter's eye: 'One lady personified Photography, being covered from head to foot in portraits, and wearing the camera as a headdress.' The story was picked up and printed again on the other side of the Atlantic, in the April issue of The Philadelphia Photographer..." (Henisch, 60). 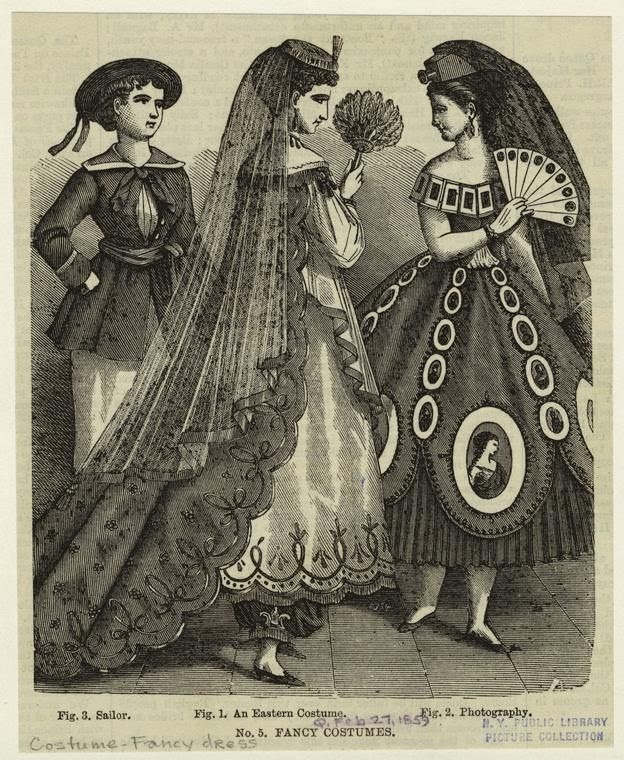 Above, a fashion plate likely from the late 1860s  (although dated 1859 online), also displayed a similar version of the dress. Images exist from the 1880s of women wearing dresses with period photographic images adorning them. Henisch says that, "in the last years of the century, it was not uncommon for a photographer to attract customers by loading a model with pictures and portraying her as a living, breathing billboard for the studio's achievements" (Henisch, 64).

In order to make the dress, there were some basic questions that needed to be answered. Most importantly, were the portraits on the dress lithographs or actual albumens? Secondly, particularly if they were albumens, were they on paper or fabric? What photographic processes existed to put an image on fabric in the mid-1860s? Also, was there a reason that the dress was shown in the color green in both fashion plates - is the color green symbolic of photography (a chemical used in photography, etc)?

To answer these questions I consulted several photography historians. What I discovered was that there were two photographic processes that existed in the mid-1860s to transfer an albumen to fabric. These were cyanotypes and salt prints. If the images were on fabric, as I believed from examining the image of the original dress in the McCord Museum, this was most likely accomplished through the salt print process, yielding a sepia toned print similar to a period CDV. I would have liked to have found more research to prove that this was the case (such as images of original mid-1860s salt prints featuring a portrait type image on fabric), but after much searching I was not able to find much photographic evidence (most likely because I was not sure where to search for it), and I had to go off of the knowledge of these historians. I would love to learn more.

Thanks to this original Fancy Dress costume, I knew that if the images on the Photography Fancy Dress were lithographs they could easily have been printed on silk fabric. Perhaps they were. It's hard to decipher exactly what we're looking at in the original 1865 image.

No one was able to answer the reason that the color green was used for the dress fabric. Any ideas?

I used scans of CDVs from our collection, all featuring ladies from Lancaster, Pennsylvania, and printed them onto silk using my home printer. I followed a tutorial and ironed the ivory silk to Reynold's freezer paper before printing on it. The process was very easy - far easier than I thought it was going to be.

I framed the images in gold silk fabric that I cut into the same shape as the brass stampings used on my fan and bracelets. I was able to create a pattern of this shape by enlarging an image of the brass stamping on the copier of my printer. The original dress has trim around the edges of the images but I thought that this would be a bit more like the fashion plate - and it would be more interesting! I knew of an original dress with gold silk appliqued to the hem, so I knew that this was period appropriate.

I draped the patterns for the dress, choosing to add a peplum to the back of the jacket and a ball gown  style bodice underneath. The peplum was inspired by the peplum on this dress bodice from Patterns of Fashion 2 by Janet Arnold. 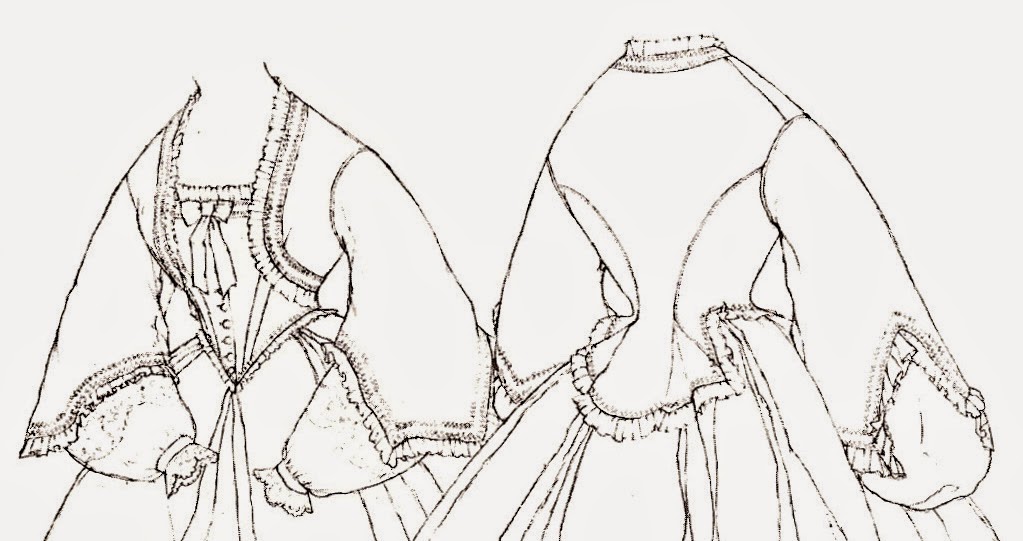 Brass Stampings purchased on Etsy were used to frame the CDVs on my fan and bracelets. Once again, I used scans of CDVs from our collection to print out portraits. I used an original 1860s Jenny Lind fan that was in poor condition (several sticks broken or missing, missing sequins, etc.) to attach the portraits to. I attached the images carefully so that they could be removed in the future. I also purchased a beautiful set of brass bracelet clasps on Etsy to use for the bracelets. 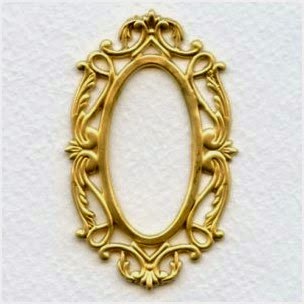 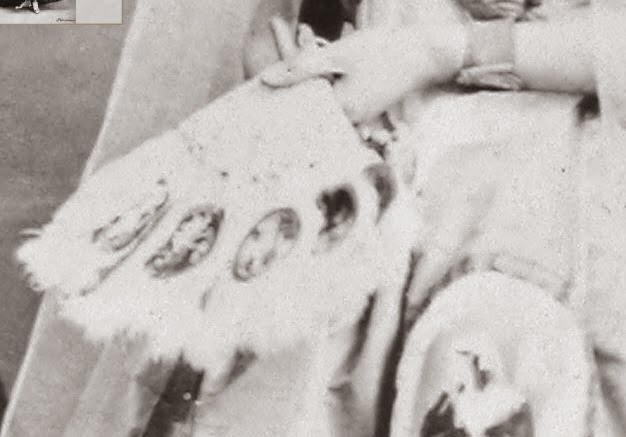 The girl in the 1865 albumen wears evening slippers with her dress. I loved the green boots in the Godey's fashion plate and the original green boots below, so I was convinced that I needed a pair of boots to go with the outfit. I loved the American Duchess Renoir boots but wasn't convinced that I would wear the green boots with any other dress, so I purchased a pair of inexpensive gold victorian-ish boots online and covered the sides with the same green silk as the dress. I was quite pleased with the results! 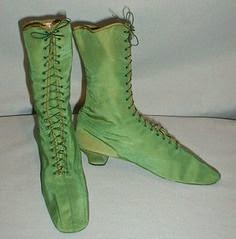 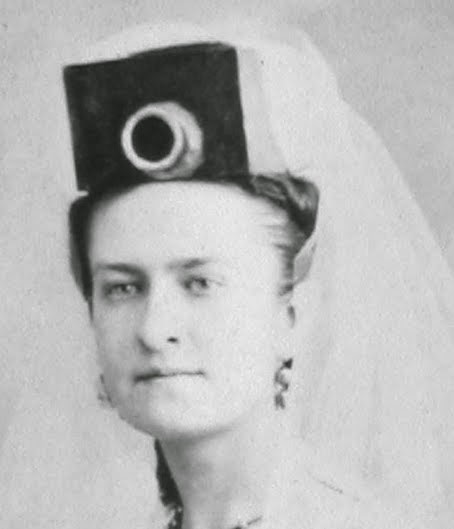 The most important, and most challenging part of my costume was creating a camera to wear on my head! I viewed original cameras at the Photo Antiquities Museum in Pittsburgh, PA and asked if the camera worn in the 1865 image was likely a real camera or a prop camera. I was told that an actual 1860s camera would be too heavy to wear on the head. I wasn't going to be able to get my hands on one of those anyway (although my father tells me that he used to own one and traded it to his wedding photographer!). I'm not sure if my version of a camera was much lighter than a period camera would have been. Although I could have gone about making the camera in a variety of ways, I wanted the look of actual wood, so I chose to use a wooden box as the base. 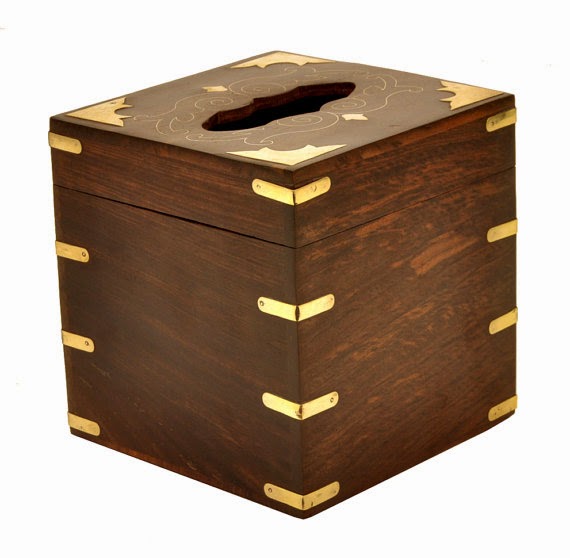 How to make an 1860s camera: Purchase wooden tissue box made in India with brass detailing (on Etsy or Amazon). Purchase brass chart magnifying lens, also from India, on Ebay. Attach them together. That's the hard part. I cut a piece of brass to cover the hole in the tissue box. For precise drilling, I consulted my father for assistance. We drilled holes into the box and inserted the legs of the magnifying glass into those holes. We then clamped the legs in place so that the lens could not fall out. Holes were drilled in the bottom of the box. I created a wire clamp from millinery wire that ran from my forehead to behind my occipital lobe (bone at back of head). These sorts of wire clamps are used on modern fascinator hats and showgirl headdresses. I was unable to determine how the original wearer attached the camera to her head. The clamp was wired to the box. The box was nailed closed with brass nails. This wire structure, along with my hair which was securely wrapped around the clamp and pinned in place, held the camera securely in place atop my head. 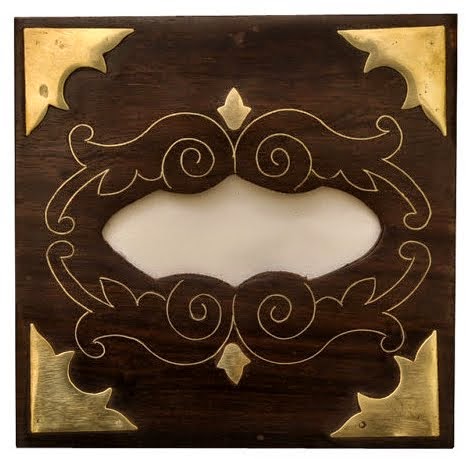 Detailing on the front of the wooden tissue box.

I decided not to wear a veil with the costume since it would cover the images on the back of the dress. I also purchased a reproduction Etruscan style necklace and remade it to look like the original, creating a pair of earrings to match. I made a new cage crinoline to wear under the dress since a short version was needed for the short skirt, and I made a new short petticoat, too.

This was the most enjoyable garment that I've ever created because it was a costume that I've been wanting to create for a long time, it was a challenge to create because there were so many components to figure out, and it required intense research to figure out what it was that I was seeing in the original 1865 image of the garment. I can't wait to challenge myself with other complex reproduction costumes!