This is my third and final year of a Costume Production MFA at Carnegie Mellon Univeristy, and we are coming to the close of our final draping class. Just one more semester to go until I graduate! Taking these pictures of my drapes makes me miss my first year in the program. Though it may have been the hardest year of my life with many a sleepless night, it was also one of the best. Each day I learned so much exciting new information and grew by leaps and bounds in my technical skills and as a person.

This drape is based on a professional designer's work. It was a rather simple drape compared to what I'm accustomed to. It is not historically accurate by merely a nod to the period as the designer intended. I love the trim (indicated in black)! 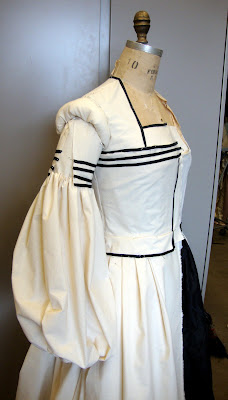 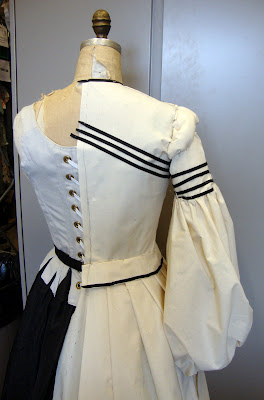 Because the designer did not indicate the trim style in the back I was able to come up with my own suggested trim lines.

This mock up could be shown to the designer for him to approve the drape. From this, the pieces could be removed from the form and transferred to brown paper and the lines "trued" (corrected using rulers and curves). The pattern would then be used to cut out a muslin mock-up for the first fitting. In the fitting the designer could still make changes to the design lines, and the fit could be checked and corrected where necessary.