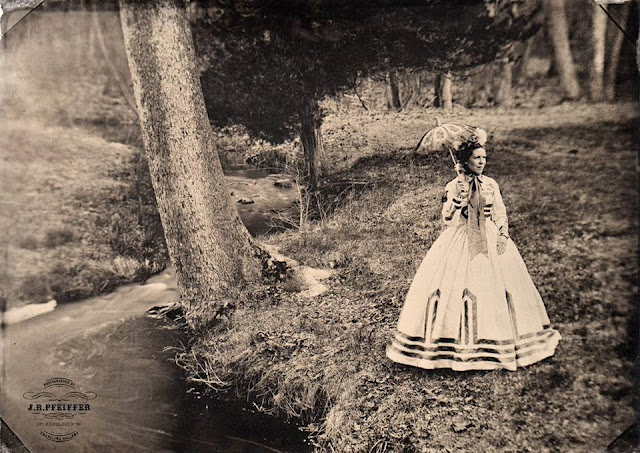 Three weekends ago I attended an event at Hopewell Furnace in Elverson, Pennsylvania. The event was an immersion weekend planned by Jessica Craig (of the Atlantic Guard Soldiers Aid Society). My mother, Nancy, our friend, Gaye and I portrayed Lancastrians visiting friends who lived in the village by the Furnace. We had specific people that we researched and portrayed. They were well-to-do ladies whose husbands owned Furnaces around Lancaster County.

I created this sheer dress and bonnet based off of an original sheer dress and a Godey's engraving and description of a bonnet. I was very happy with how they both turned out. It's been a challenge to perfect the fit of my dresses when I have to fit them on myself. I think that I've finally got the pattern just about right!

I had my tintype made by the talented Jim Pfeiffer by the creek. I wanted a very picturesque landscape image and he did a fantastic job providing just that! 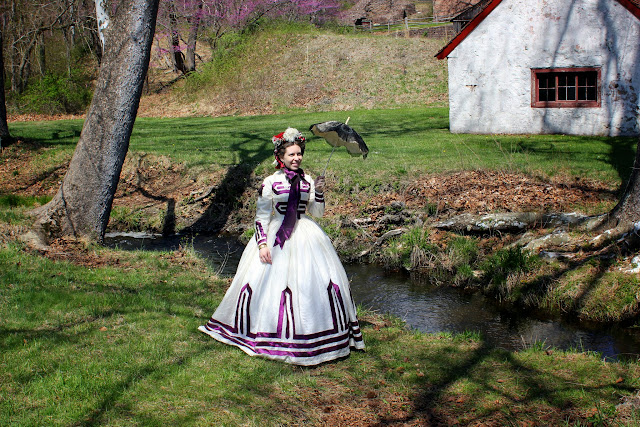 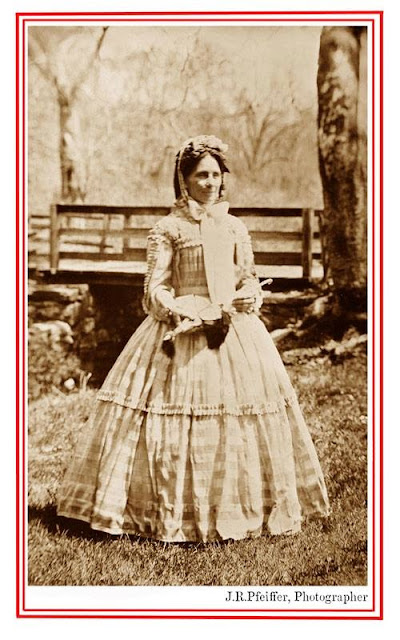 My mother also had her image taken by the creek but opted for a closer portrait. 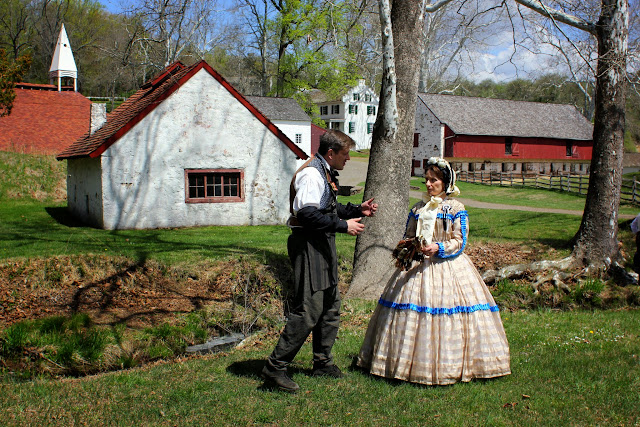 Here she is consulting with the photographer about the arrangement of her accessories. 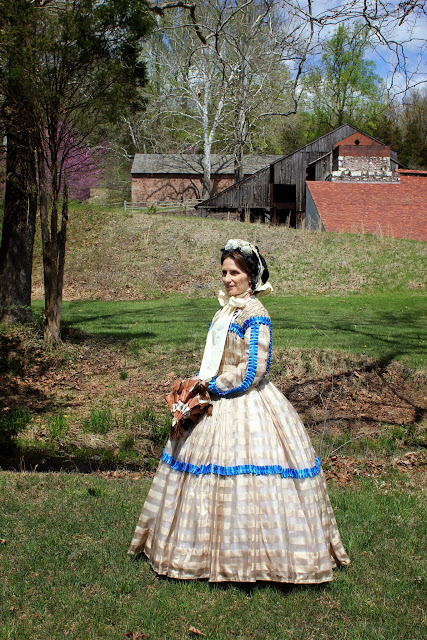 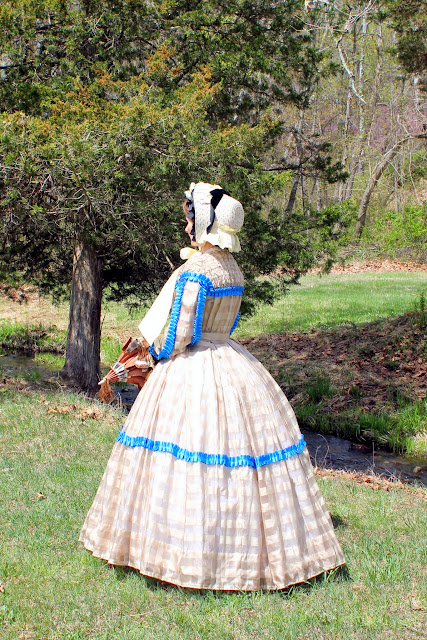 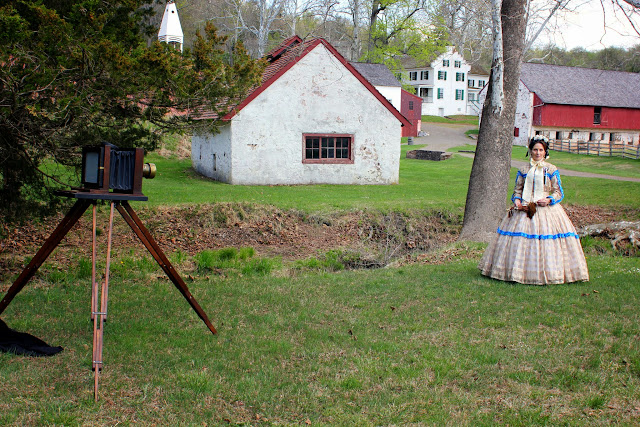 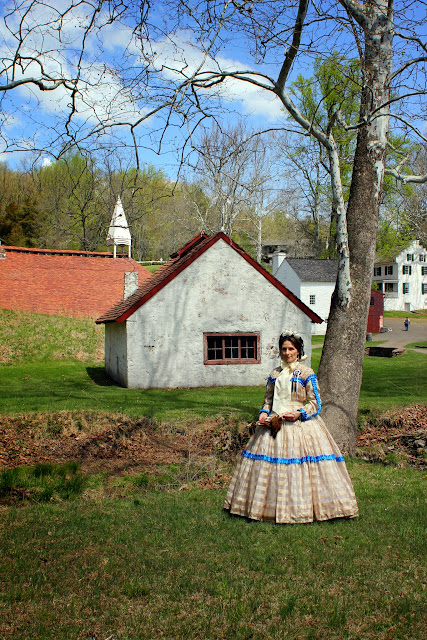 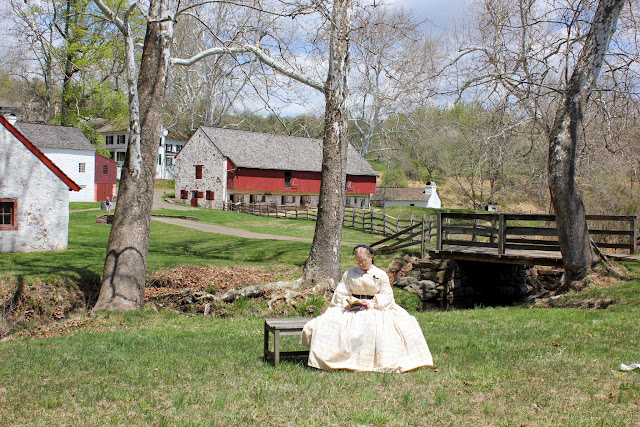 Gaye had her image made reading in front of the bridge. The tintype that Jim made of her was very lovely. 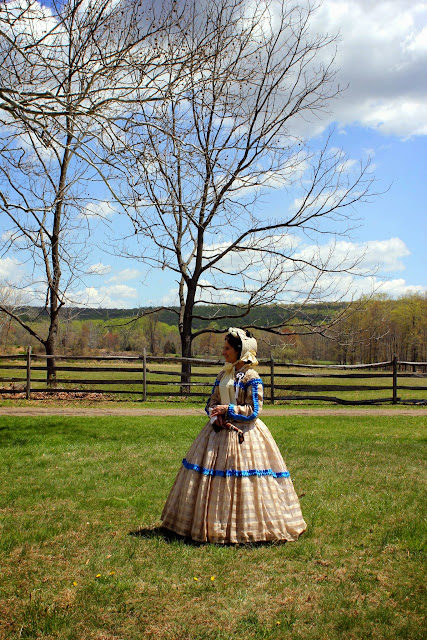 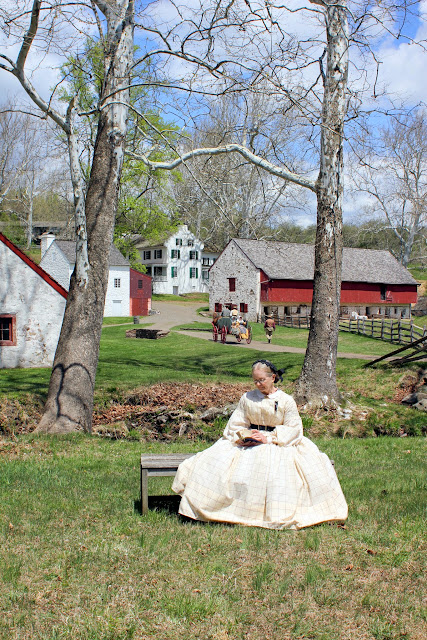 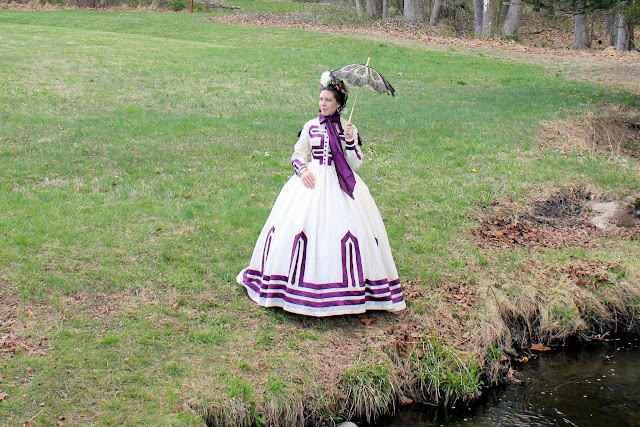 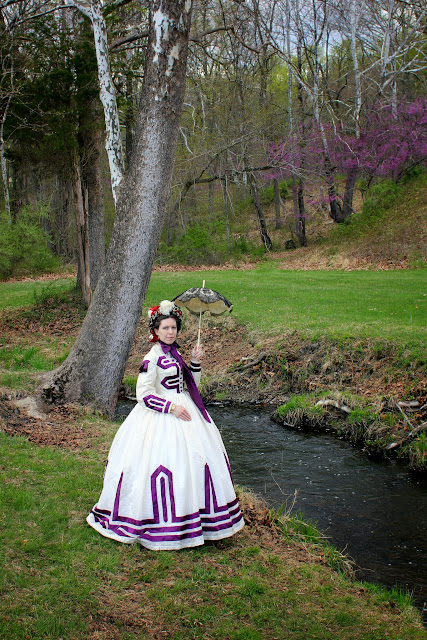 I had two images made while at Hopewell - this one was a closeup of the dress and bonnet. 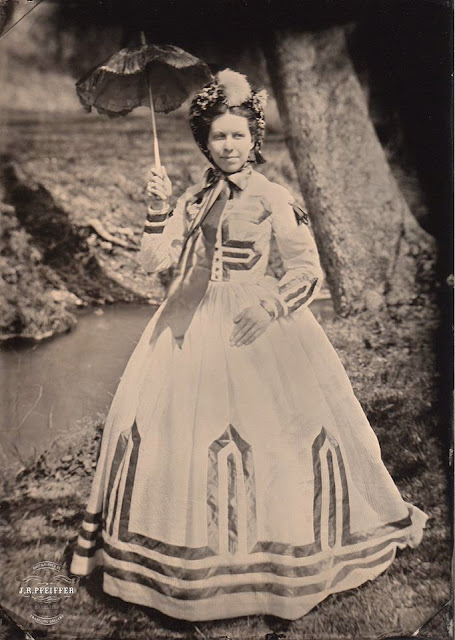 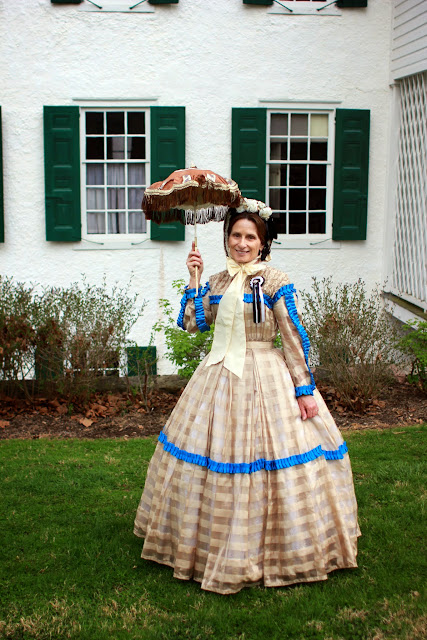 In the pictures above and below you'll notice that my mother and Gaye both wear black badges, these are mourning cockades which were worn by almost everyone at this time in 1865 to pay respects to the recently deceased President Lincoln. 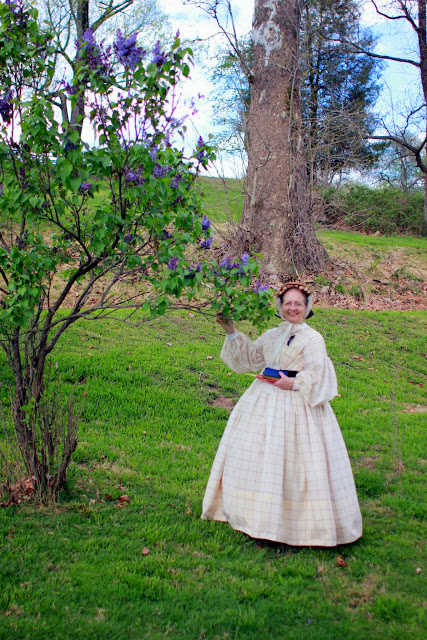 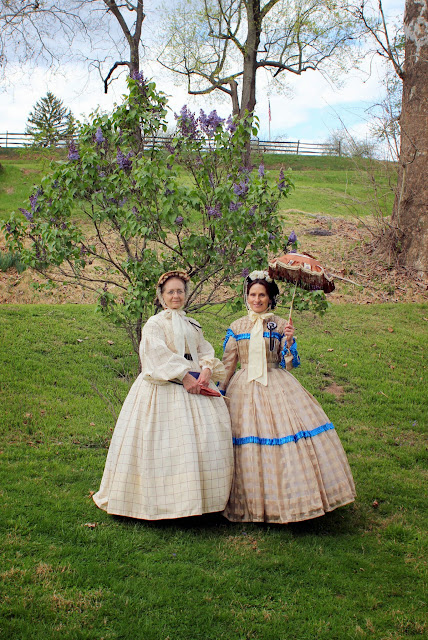 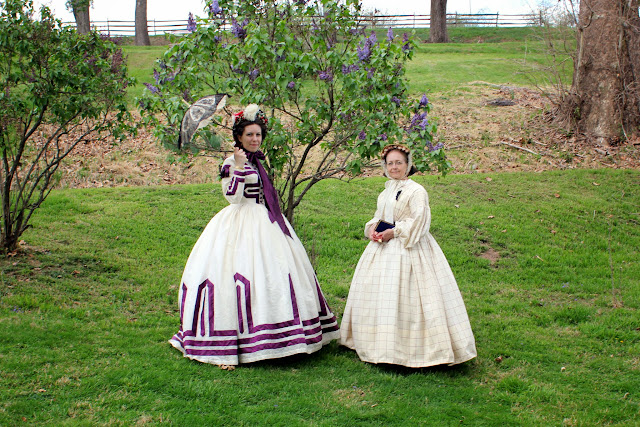 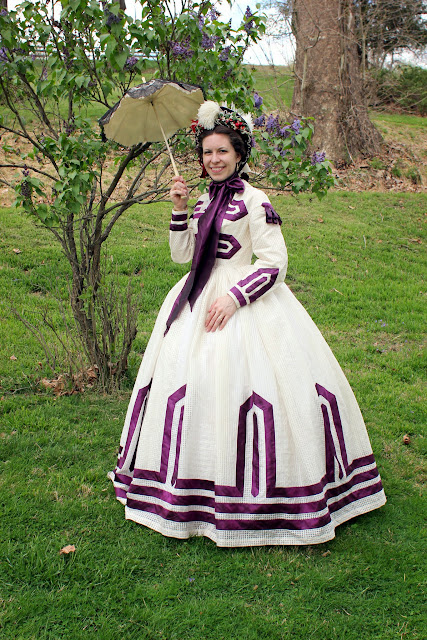 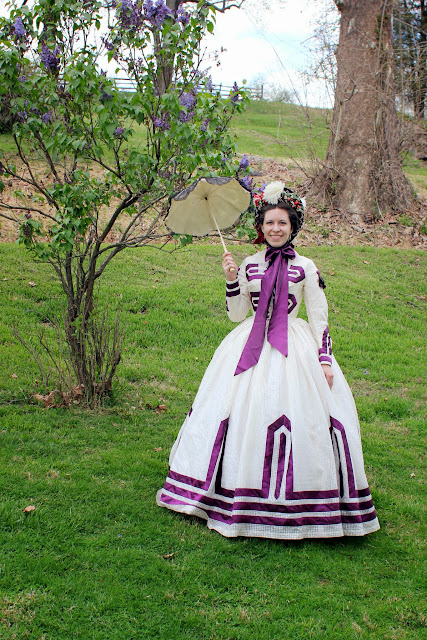 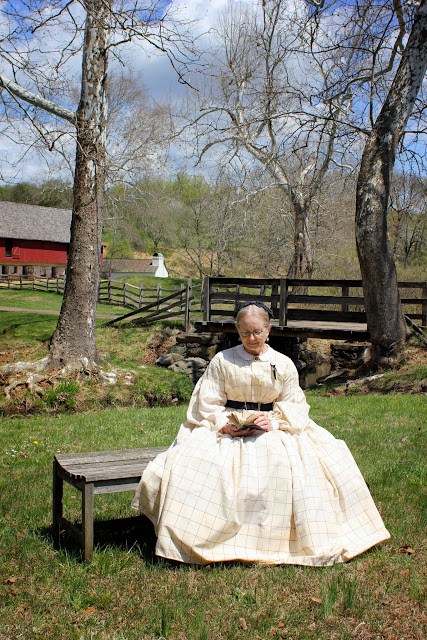 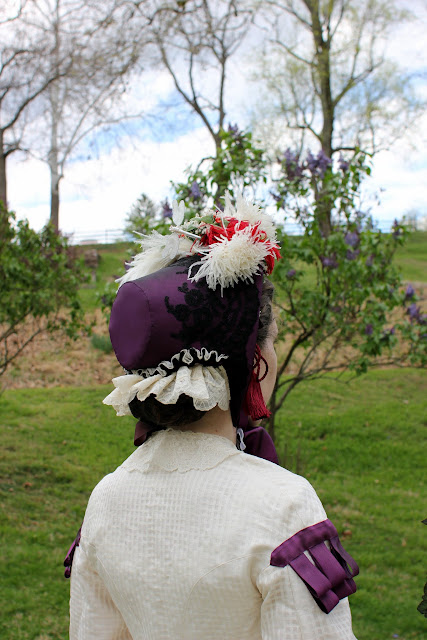 Here are closeup photos of the bonnet that I made. I followed a description of a bonnet from a Godey's engraving. I was able to find some original Chantilly lace on eBay that had been cut from a damaged lace item (shawl, veil, etc.). I cut the flowers out and applied them to the bonnet as called for in the description. The bonnet curtain is composed of blonde lace and black lace - also as described.

Half way through making the bonnet I thought that it looked hideous - the fashion plate called for way more trim than I would prefer to add to a bonnet! However, when all of the components were added together it came together quite nicely. It seems that many living historians either prefer their bonnets be trimmed very plainly or that they can only afford to have a millinery apply a small amount of trim. I know that I prefer bonnets with less trim. But looking at original bonnets that still contain all of their trim - as well as period images (CDVs) - it seems that many bonnets had a great deal of trim. Perhaps more trim than our modern eye might prefer. It was a good lesson for me to learn!

The inside is trimmed with small berries that I created by clustering stamens that I had painted. On the outside you can see a dragonfly hiding amongst the feathers. 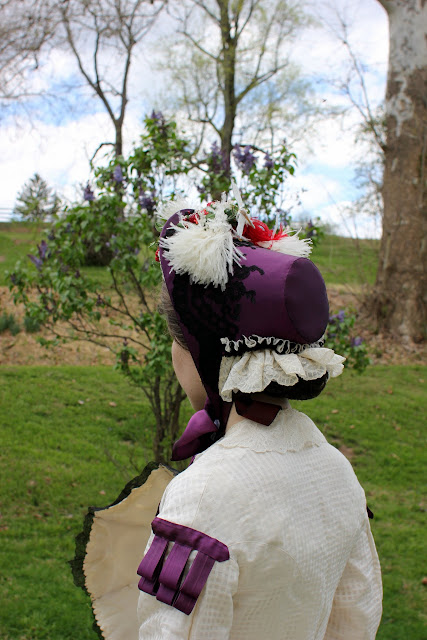